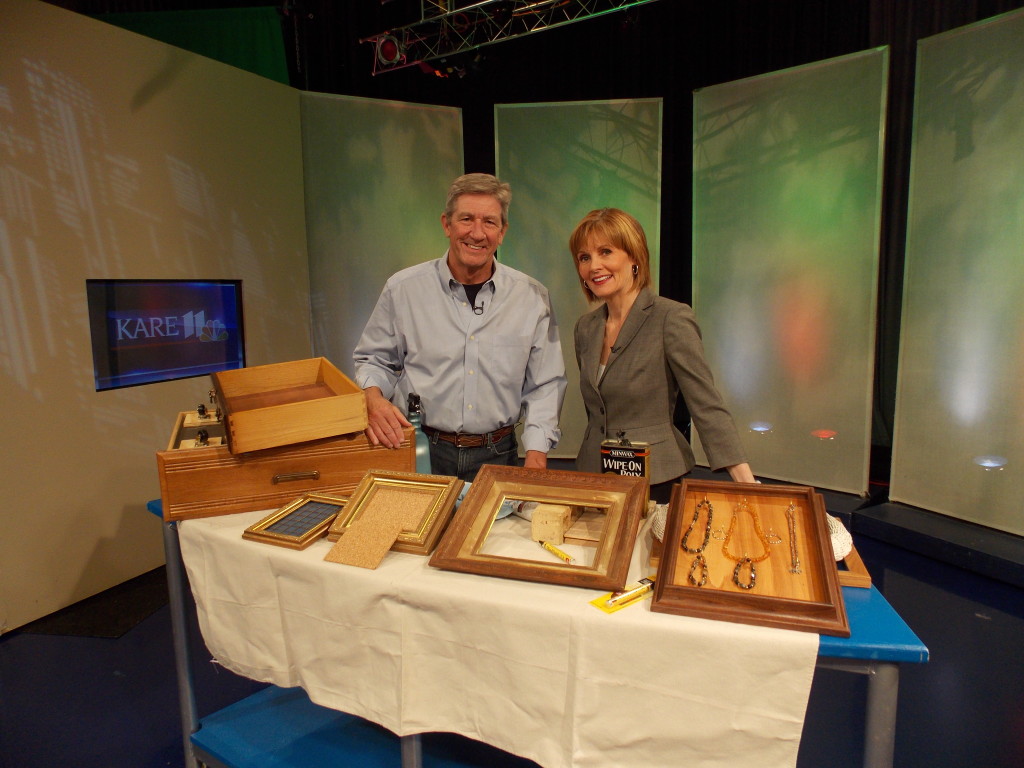 Ever wonder what goes on behind the scenes for one of those popular do-it-yourself segments we all enjoy watching? I recently was asked to appear alongside Diana Pierce, co-anchor of KARE-11 in Minneapolis, where I shared some tips for turning garage sale discards into something unique and useful for your home. If you’d like a glimpse behind the curtain, just take a peek here. 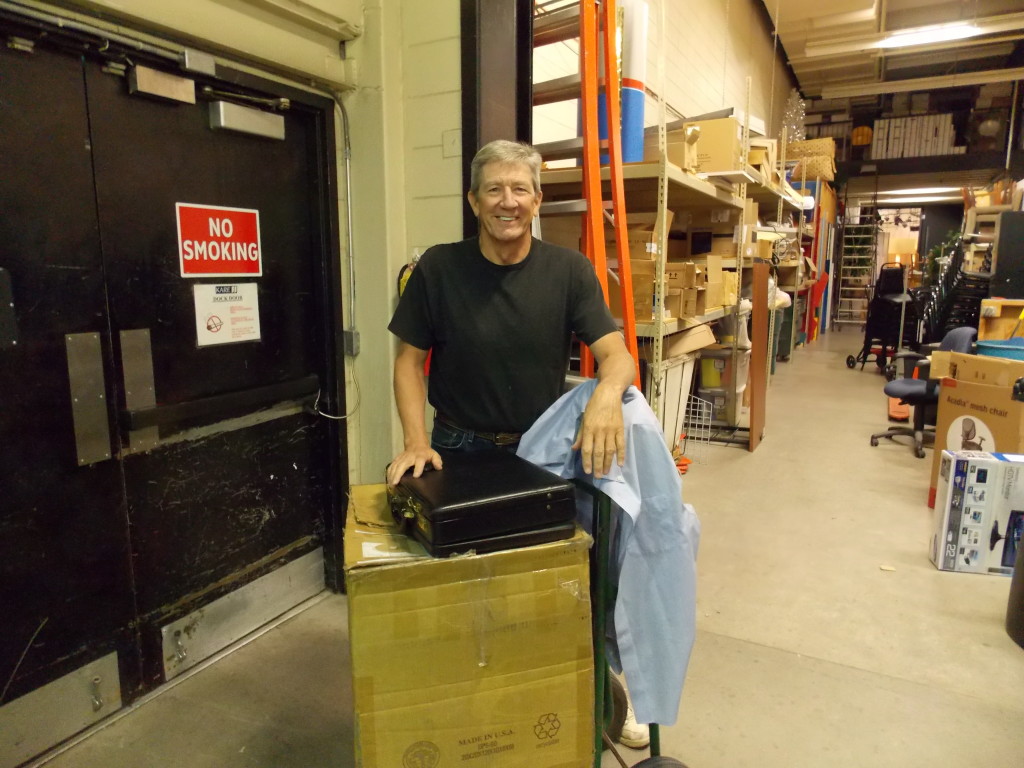 Every segment starts and ends in the same place:  backstage. Rather than arriving on a red carpet, I generally come in through the loading dock, along with a couple of battered boxes of props and a fresh shirt to slip on a couple of hours later — after the sweaty work is done! 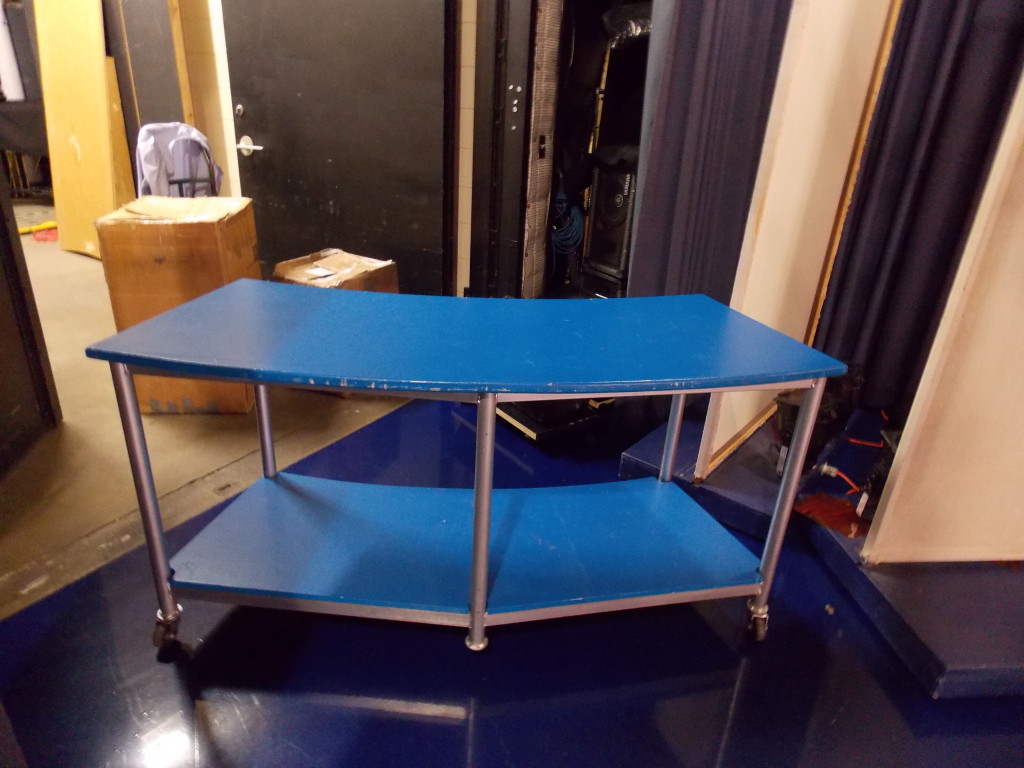 Typically, this is what awaits me:  a single six-foot table rolled backstage for me to set my props on. I never know what the color or the condition of the table might be, so I always pack a canvas drop cloth to serve as a cover — and as a buffer for any spills. 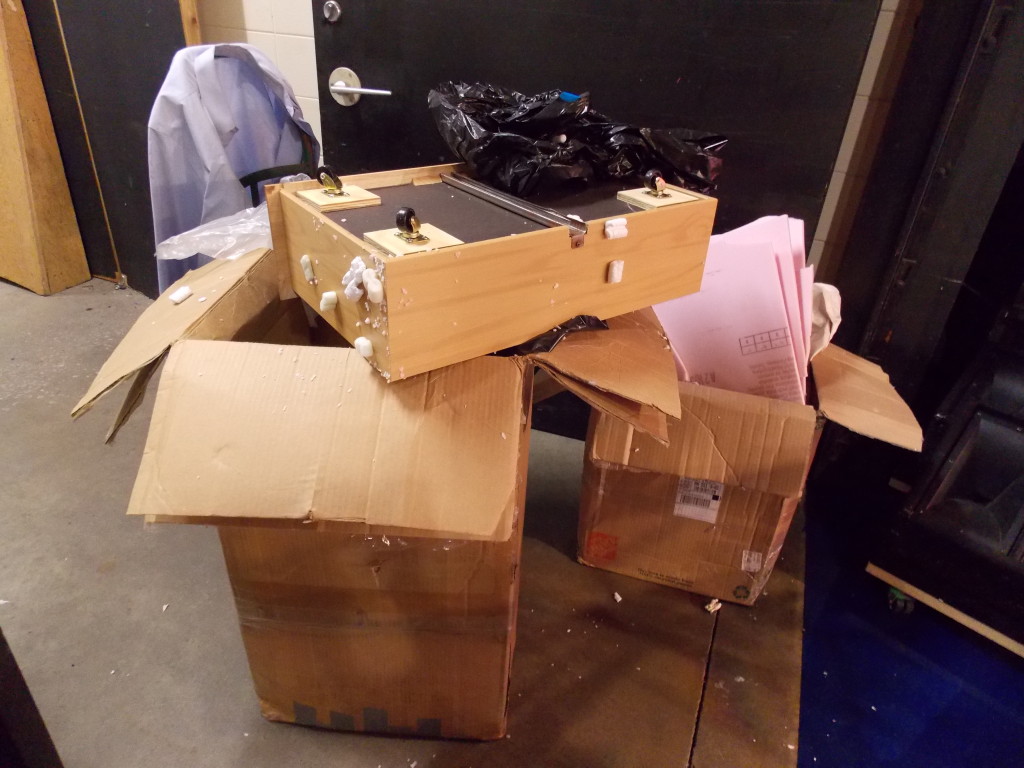 After several years of appearing on television, I am now more nervous as I open my boxes than I am when the cameras start rolling. Back home, I checked my list several times and I carefully packed and padded all my props, but backstage I still worry:  “What could I have forgotten?” and “What might have been broken?” 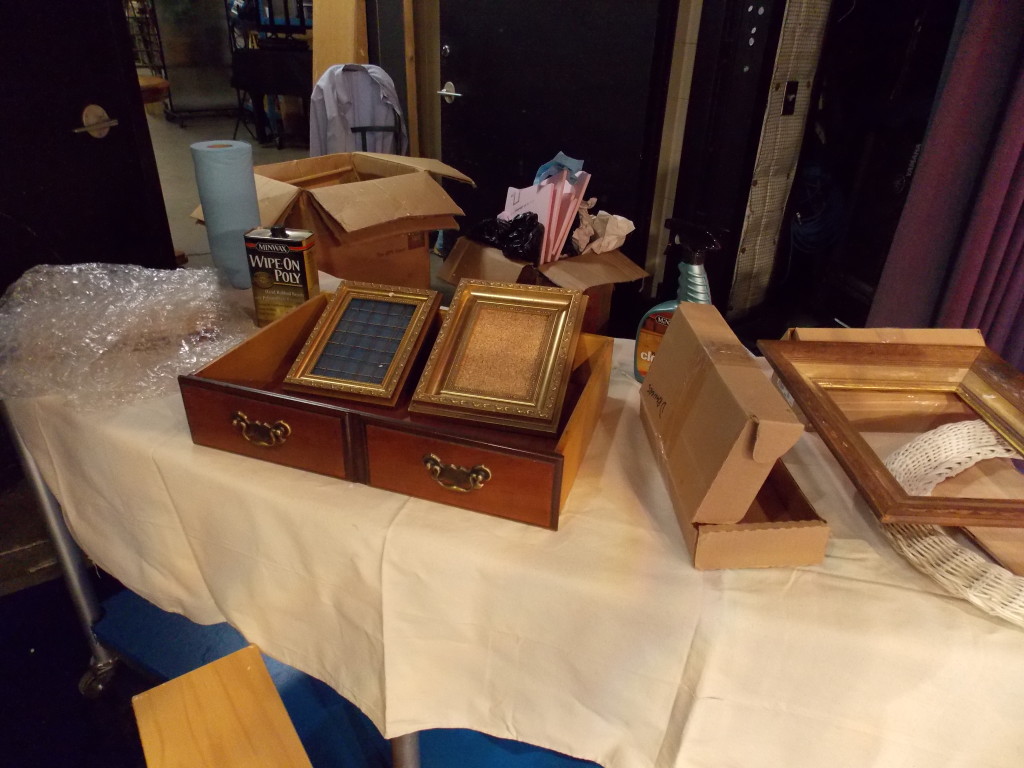 Gradually everything comes out of each of the two boxes, gets checked for damage, then gets placed on the table. I have learned to ask the stage manager on which end of the table the host prefers to stand, placing those tools and cans I will be using over on my side. I also ask if the host is a dive-in, hands-on type or a stand back, hands-off personality, positioning my gloves, brushes, cans, and cloths accordingly. 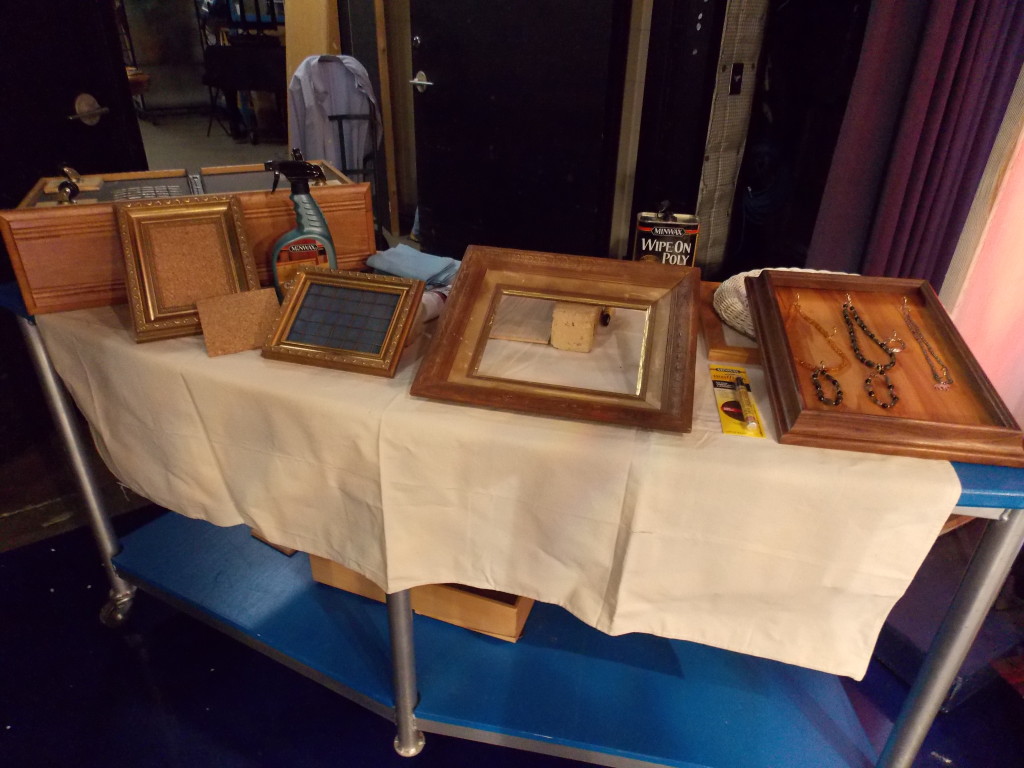 By thirty minutes before air time, I have my table ready to go:  props placed in a logical sequence (though hosts are notorious for asking questions out of order), products opened, stirred and tested, and the camera crew alerted to the location of close-up shots. Sometimes the host will stop by on his or her way to make-up, just to find out what we will be doing. More often, they simply wing it, depending on the guest to guide them and the viewer through the necessary steps. 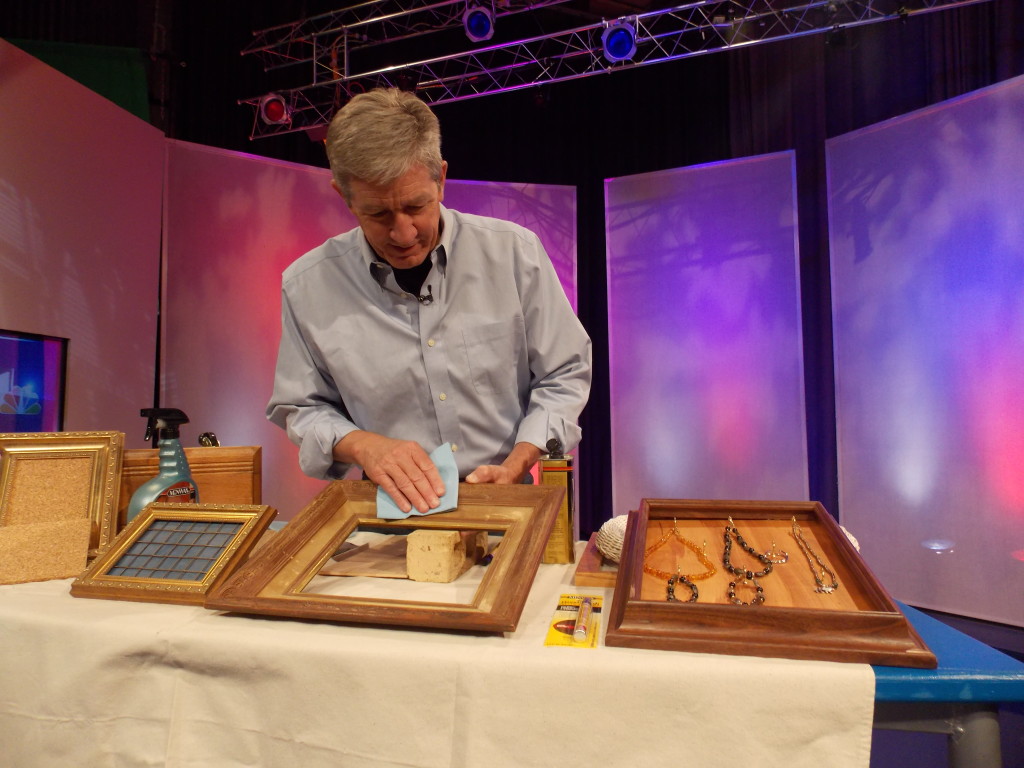 Being ready ahead of time also gives me the opportunity to provide a live “tease” for the producer. While the host is still in make-up or working with another guest, the camera crew will often ask me to mimic something we will be doing on the segment a little later in the show. If I’m ready, with my table prepared and wearing a fresh shirt, I’ll get a some extra air time even before the host arrives. Here I’m using Minwax® Wood Cabinet Cleaner on an old dirty walnut picture frame. 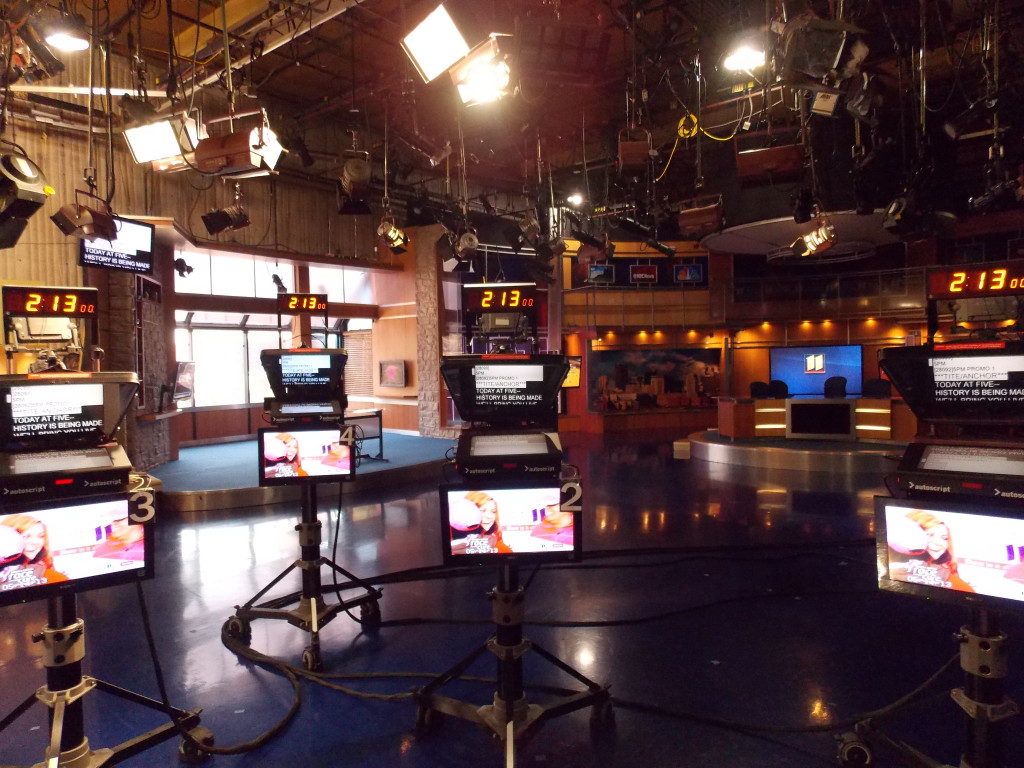 And what does it look like from my side of the table? First tip:  don’t look up! Only the host talks to the cameras; my job is to talk to the host. Looking at the cameras is only apt to make you nervous and confused. My rule is simple:  talk to the host, but always show what you are doing to the camera — and the viewer.

Five minutes later and its all over. The cameras roll away, the stage director rushes off, the host leaves, the sound engineer eases the microphone out from beneath your shirt, and you are left where you started:  backstage with your boxes. But that’s television, and it is still a powerful medium for delivering my message:  Minwax® makes wood finishing fun, easy, and rewarding.

PS – Don’t forget to check out the Minwax® Facebook page for valuable tips, techniques and projects!